Thousands of pills filled with powdered human baby flesh discovered by customs officials in South Korea
More than 17,000 pills smuggled into country have been intercepted since last August
Pills viewed as a 'miracle cure' for all ailments - but unsurprisingly they are harmful
By RICHARD SHEARS and ROB COOPER
PUBLISHED: 10:44 GMT, 7 May 2012 | UPDATED: 11:49 GMT, 8 May 2012
Comments (659)
Share

Thousands of pills filled with powdered human flesh have been discovered by customs officials in South Korea, it was revealed today.
The capsules are in demand because they are viewed as being a medicinal 'cure-all'.
The grim trade is being run from China where corrupt medical staff are said to be tipping off medical companies when babies are aborted or delivered still-born.
Scroll down for video 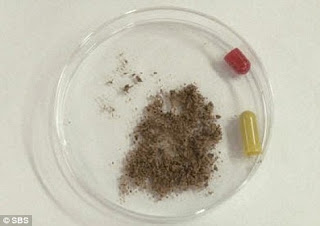 Dead baby pills: This is ground baby powder which tests discovered is 99.7 per cent human last year. South Korean officials have stopped 17,000 dead baby pills being imported since last August
The tiny corpses are then bought, stored in household refrigerators in homes of those involved in the trade before they are removed and taken to clinics where they are placed in medical drying microwaves.
Once the skin is tinder dry, it is pummelled into powder and then processed into capsules along with herbs to disguise the true ingredients from health investigators and customs officers.

More...
Chinese politician whose wife 'confessed to killing British businessman' had 'plotted three ways to kill police chief to hide murder'
The discoveries since last August has shocked even hardened customs agents who have pledged to strengthen inspections.
Chinese officials are understood to have been aware of the trade and have tried to stop the capsules being exported but thousands of packets of them have been smuggled through to South Korea.

Danger: The Chinese Ministry of Health has launched an investigation into the alleged production of pills made from dead babies
There is a huge demand for alternative Chinese remedies - which include ground up rhino horns.
The Chinese have historically consumed human placentas to improve blood supply and circulation.
ENDANGERED SPECIES IN CHINESE MEDICINES

Chinese alternative medicines contain traces of endangered species, a study has found.
Many of the remedies are more than 2,000 years old - and claim to be alternative methods for curing disease.
The use of rhino horns in Chinese medicines has been widely criticised.
Despite the claims the 'cures' can treat everything from broken bones to headaches, there is limited proof they actually work.
A team of Australian scientists discovered that some of the medicines contained traces of black bears and antelope.
The Murdoch University team used DNA sequencing to work out what the plants and animal ingredients are.
Health authorities in Asia are concerned that if the powdered foetus trade is allowed to continue the capsules will find their way onto the internet and be sold to gullible or sick desperate people in other parts of the world.
The South Korean Customs Service said today that it had heightened its searches of suspicious packages being brought into the country by travellers from China in an attempt to stamp out the sickening trade.
According to customs agents, 35 smuggling attempts have been made since August last year involving more than 17,000 capsules disguised as 'stamina boosters'.
Hospitals and abortion clinics in China reportedly pass the remains onto drugs companies when a baby is stillborn or aborted, the South Korean SBS documentary team reported last year.
The San Francisco Times reported that tests carried out on the pills confirmed they were made up of 99.7 per cent human remains.
The tests were successfully able to establish the genders of the babies used.
There is a huge demand for the pills which are thought to enhance stamina. Microwave-dried placenta is also sought after for its alleged 'medicinal' benefits.
However, in reality the human flesh capsules contain super-bacteria and other harmful ingredients.
A number of smugglers who have been detained by the South Korean authorities have claimed they did not know what the ingredients were or the manufacturing process behind them.

Crackdown: Chinese officials, pictured confiscating thousands of illegal tablets, say they will clampdown on the massive herbal medicine industry which has seen dangerous bacteria an human remains added to seized pills
'Ethnic Koreans from north-east China who now live in South Korea are those who were mostly intending to use the capsules or share them with other Korean-Chinese' said a customs official.
'They are normally brought into South Korea in luggage or posted by international mail.'
The capsules were all confiscated but no one has been punished because the amount was deemed small and they were not intended for sale, a customs official added.
Chinese newspapers have identified the north eastern provinces as the source of the human flesh capsules, in particular the Jilin region which is close to North Korea.

Smuggling: More than 17,000 capsules disguised as 'stamina boosters' have been intercepted as they were smuggled into South Korea last year (file photo of Seoul airport)
There have been disturbing reports that some babies were those who had perished in China's notorious 'dying rooms' where youngsters are deliberately left to die because they were born into families that already had the limit of one child in country areas.
In order to keep its population down, China performs 13 million abortions a year - mainly because mothers sacrifice their newborns to avoid punishment such as severe fines or even a beating by the authorities.
The Chinese authorities have confirmed that 38 per cent of women of child-bearing age have been sterilised - but the babies that are aborted do not go to waste because of the sickening trade in using their corpses for purported medicinal purposes.
Despite their disgust at discovering packets of the so-called rejuvenation pills being brought in from China, South Korean officials have refused to confirm where the babies came from or who made the capsules.
Sources said this was because they were not prepared to create diplomatic friction with Beijing, preferring to leave it to Chinese officials to do something about the horrific trade in powdered babies.

Powdered Human Baby Flesh Capsules Discovered In South Korea, What Are They Used For?


By AMANDA REMLING: Subscribe to Amanda's RSS feed
May 7, 2012 7:48 AM EDT
Custom officials in South Korea have been cracking down on inspections due to the rise in the smuggling of Chinese-made capsules into the country. The capsules are reportedly filled with powdered human baby flesh.


Enlarge
(Photo: Reuters)
South Korea has been cracking down on the smuggling of human baby flesh capsules.

Since last August, customs have discovered 35 smuggling attempts from China, reports the Associated Press. The 35 attempts involved about 17,450 harmful human-flesh capsules that were disguised as "stamina-boosters."

The Korean customs service said in a statement Monday that the capsules have been found in tourist luggage and international mail. The disguised performance enhancement capsules are said to contain "super bacteria" and are considered hazardous to human health.

Human baby-flesh pills are in demand for many reasons, some who believe that it is a "tonic for disease." The Wall Street Journal reports that in China it is common to consume human placentas to revive blood supply and circulation. Another reported theory for the use of these pills is that they enhance sexual performance.

According to the Daily Mail, how the infants died before they ended up in the capsules is unknown. A documentary has claimed that pharmaceutical companies in China are working with abortion clinics. Another suggestion is that the infants come from parents who have too many children and abandon them in "dying rooms."

A Google translation of a 2011 SBS documentary on the matter states that the dead babies were stored in "a normal family's refrigerator" for stealth. The dead baby was then put in a medical drying microwave. The next step was grinding up the dry baby and inserting the powder into the pill capsules.

Customs has stated that they have narrowed down the origins of the pills to the cities of Yanji, Jilin, Quingdao and Tianjin.

Those who have been found in possession of the pills have denied knowing the ingredients.

To report problems or to leave feedback about this article, e-mail: a.remling@ibtimes.com
To contact the editor, e-mail: editor@ibtimes.com

17,500 Powdered Human Baby Pills Seized by South Korea
Looking to "cure disease and boost stamina" with that old standby, capsules of powdered human flesh? Don't go to South Korea, where officials have pledged to tighten its customs inspections after seizing some 17,500 such capsules over the last year:

The Korea Customs Service said it had found almost 17,500 of the capsules being smuggled into the country from China since August 2011.

The powdered flesh, which officials said came from dead babies and foetuses, is reportedly thought by some to cure disease and boost stamina.

But officials said the capsules were full of bacteria and a health risk.

Yes, they are full of bacteria, and also, of powdered fetus and baby. A South Korean documentary from last year claims the capsules come in from northeast China; China, according to Health Ministry spokesman Deng Haihua, has "strict management of disposal of infant and foetal remains as well as placentas." Meanwhile, in the United States, four major food service companies refuse to confirm or deny whether or not they use aborted human fetuses in their food. 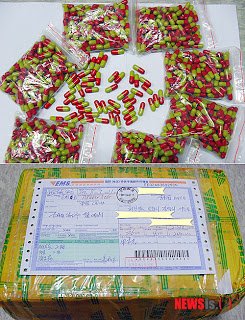