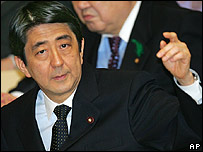 Shinzo Abe was responding to a US Congressional resolution
Japan's Prime Minister Shinzo Abe has said there is no evidence that women were forced to become sex slaves by the Japanese army during World War II.
He told reporters there was "no evidence to prove there was coercion", adding "we have to take it from there".

A Cabinet spokesman appeared to play down the comments by saying Mr Abe stood by a 1993 government apology for the use of so-called "comfort women".

A resolution before US Congress calls on Tokyo to formally resolve the issue.

The draft text was debated by the House of Representatives last week, prompting criticism from the Japanese foreign minister who said it was "not based on objective facts".

Historians believe at least 200,000 young women were forced to serve in the Japanese army's brothels during World War II.

However, some Japanese conservative politicians have questioned the extent of the country's wartime atrocities.

A number are seeking to downgrade the government's 1993 acknowledgement that the Imperial Army set up and ran brothels for its troops during the war.

"There has been debate over the question of whether there was coercion," Mr Abe told journalists on Thursday.

"But the fact is, there was no evidence to prove there was coercion as initially suggested." 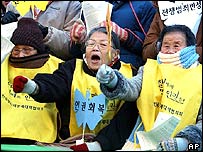 The issue is an emotive one for the East Asian region
"That largely changes what constitutes the definition of coercion, and we have to take it from there," he said.

Chief Cabinet Secretary Yasuhisa Shiozaki later said the Japanese government did not agree with the US congressional resolution, but still honoured the 1993 statement.

The resolution before the US Congress seeks to reject the revisionists' moves by calling on the Japanese prime minister to "formally acknowledge, apologise and accept historical responsibility" for the comfort women.

Three former comfort women gave evidence at the hearing, describing the rape and torture they endured at the hands of the Japanese soldiers.

Many former comfort women are still seeking compensation from the Japanese government for their experiences.

Tokyo did set up a compensation fund in 1995, but it relies on private donations rather than government money.

On a visit to Japan on Friday, US Deputy Secretary of State John Negroponte refused to comment directly on Mr Abe's comments but said historical regional problems should not interfere with crucial diplomatic issues.

"I think our view is that what happened during the war was most deplorable, but... this is something that must be dealt with between Japan and the countries that were affected," he told a news conference.
投稿者 sakuramochi 時刻: 25.7.12
Email ThisBlogThis!Share to TwitterShare to FacebookShare to Pinterest
ラベル: comfort women news